skip to main | skip to sidebar

After I saw the Peking duck episode of Heston Blumenthal's "In Search of Perfection", it is apparent that one has to be crazy to come up with that recipe, and one has to be even more crazy to try it. That fits me well...

First course was, of course, the duck skin pancakes. Instead of the traditional method of inflating the duck to separate the skin followed by roasting, this recipe calls for separating the skin and stitching it onto a cooling rack. 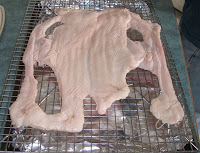 The skin was then cooked in a low temperature oven for 3 hours to render out the fat. A mixture of maltose and vinegar was brushed on top, and the skin was then cooked at a higher temperature (with a smoke package) for 15 minutes. Just before serving, hot oil was ladled over the skin until the skin is crisp and take on a nice colour. This last step actually took a lot longer than I imagined (about 30 minutes). This is what the skin looked like after the oil bath and then cut up. 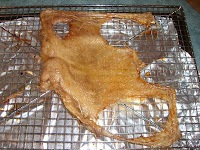 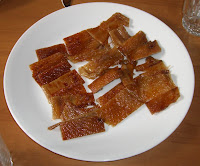 One very strange thing about this recipe is that Blumenthal's recipes usually start from scratch on everything, including baking your own buns and perhaps even constructing your own oven for the job. In this case, he just asks you to buy the pancakes. Ironically the only place I know that sells these pancakes in Lethbridge actually ran out, so I had to make them myself. At the end they were perhaps a few mm thicker than they should be, but the texture was right. 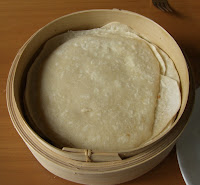 Here is what the pancakes look like just before I wrapped it up. 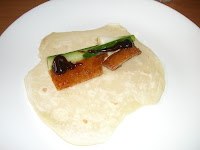 The second course was some duck breast that had been brined and then poached slowly in a duck stock (more on this later). It came out as I expected: tender and very flavorful.

The third course was a duck consomme with tofu. I did not follow the "consomme with dumpling" recipe in the book: somehow I thought tofu was more what I mentally expect from such a soup. To make the consomme, I first made a double stock with duck bones, chicken wings, and pork bones.
This was done in a pressure cooker so it was extremely cloudy. The next part of the recipe calls for ice filtration: freezing the stock and slowly melting it in the fridge so that the gelatin would trap all impurities.

This was supposed to take 24 hours, but after 12 hours not a single drop has come out. I took it out of the fridge for another 3 hours. Nothing. It was clear that perhaps I put in too much gelatin. I then put it next to a space heater and finally it started to drip. As expected, absolutely clear and flavorful liquid started to come out. Unfortunately there was definitely too much gelatin and I only managed to get a few tbsp after 1.5 hours from 1.5L of stock! Then disaster struck: the gelatin was melting too fast and dripped down, and everything was cloudy again. 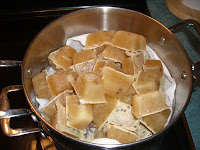 At that point I gave up and decided to clarify the stock with the classical technique: simmering with egg white, aromatics, lean ground meat. That did the trick. The stock was then seasoned and tofu was added for a very flavorful consomme. 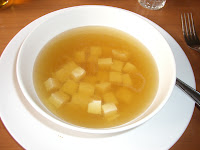 Last course was stir fry with leg meat. Again I deviated from the recipe. I poached the legs instead of making a confit---confit is not really a Chinese technique, and I was poaching the breast anyway. The duck meat was then chopped into small bits. I added bamboo shoot, water chestnuts, shiitake mushrooms, and straw mushrooms. A touch of oyster sauce and sesame oil were added as well. Everything was then wrapped in large lettuce leaves. 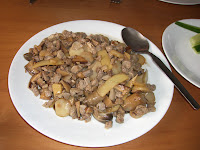 Overall, it was a lot of work and perhaps it's easier to just go and order from restaurant. But it was definitely fun to do it yourself and the result was actually better: especially the soup. I will have to try ice filtration some other day.

I'm impressed. Loretta and I have made duck a l'orange a few times, but this is much more involved than that!

No fruit allowed on this blog!

Actually it is not too bad, just a bit of work but like many things the individual steps are actually straightforward...just a lot of steps to follow.

Having experienced it first-hand, I will testify that Howard's Peking duck is BETTER than the one served in the New Dynasty, particularly the soup and stir fry! ^_^